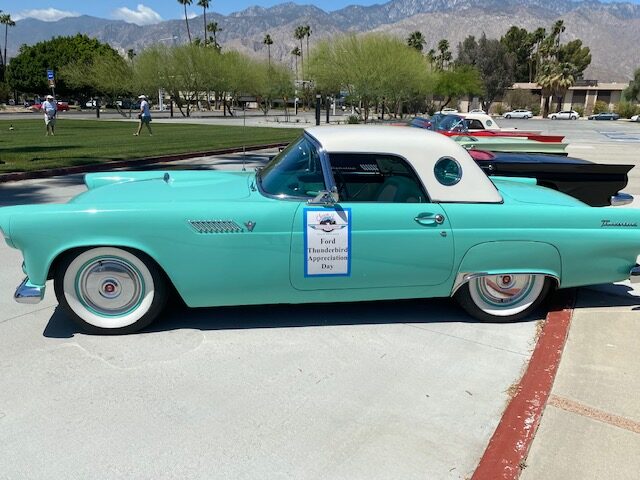 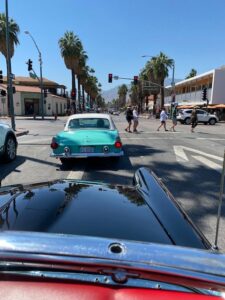 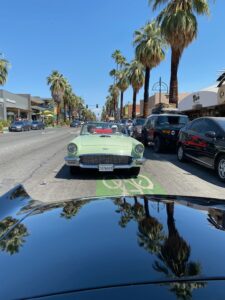 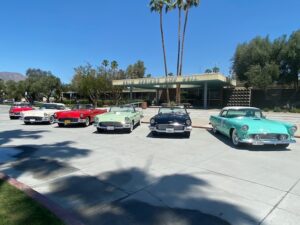 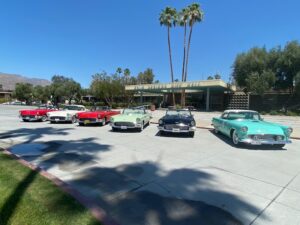 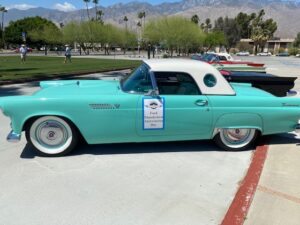 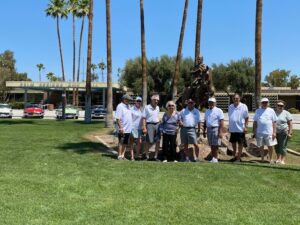 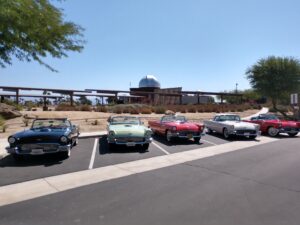 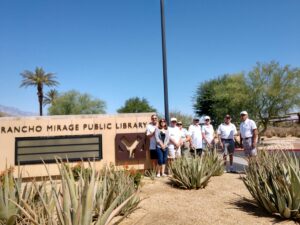 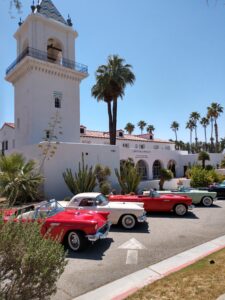 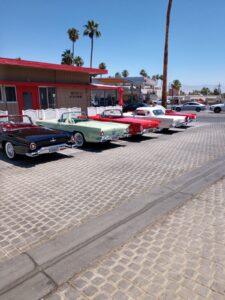 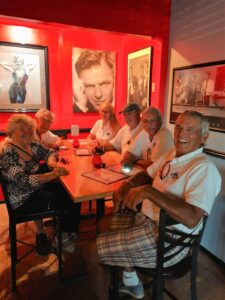 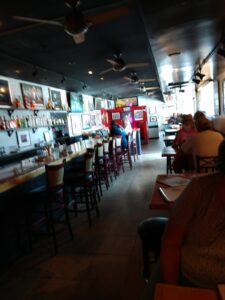 Mother Nature favored us on Thunderbird Appreciation Day. What was supposed to be a very hot, windy and gusty day turned out to be a perfect day to cruise the T-Birds! Read on for details!

THUNDERBIRD APPRECIATION DAY
May 16th, Thunderbird Appreciation Day in the desert, was forecast to be a windy day with 20-30 mph wind gusting to 60 mpg! Mother Nature, however, has a soft spot for Classic Thunderbirds and held off, presenting us with an absolutely beautiful day full of sunshine and perfect 80-degree calm weather.

Ten PSCTC members and six T-Birds, pleasantly surprised by the beautiful morning, gathered to cruise 7 of the Coachella Valley cities in celebration of the day. We met at the Rancho Mirage library where we were surprised with a visit from bicyclists who had many questions about the Birds and, in return for that information, told us where to find the best eggs benedict in the valley! A photographer also stopped to snap photos for her album and assisted us in our photo-op in front of the library and observatory.
The next stop, after cruising through Cathedral City, was in Palm Springs for a photo-op at the iconic El Mirador Hotel bell tower. The bell tower is all that remains of the hotel which opened New Year’s Eve 1928 and was the playground of the Hollywood set and corporate elite for many years.

We continued on to the Palm Springs City Hall for a photo in front of the building’s classic mid-century design, as well as a statue of Palm Springs legend, Frank Bogert, who was Mayor from 1958-1966 and 1985-1988.

By now stomachs started growling so we headed for lunch via a cruise down Palm Canyon Drive through bustling downtown Palm Springs. There are traffic lights every block and at each stop cameras came out and fingers pointed. At one stop a man in the car next to us thanked us for a great memory. He grew up in Michigan and a family member worked for Ford so he got to ride in the first 1955 T-Bird that came off the assembly when he was a kid.

Arriving at “Pete’s Hideaway” for lunch we were met by the owner Pete Penta who was taken at the sight of the T-Birds lined up in his parking lot. Pete is a restaurateur who has owned many restaurants in Palm Springs. The Hideaway is unique in that it is a local neighborhood bar and grill (think Cheers) with the walls adorned with photos, portraits and pencil sketches of the notable Hollywood entertainers and actors of the 1950’s – 1960’s. Pete claims to have two of the best chefs in the Valley and after having lunch we all agreed!

At the restaurant parking lot, we found people visiting from Australia who stopped to take photos, admire the cars and ask questions.

We then headed back to the east valley for a cruise through Palm Desert’s El Paseo Drive, (the Rodeo Drive of the desert), and home via La Quinta and Indio. (Our interpretation of Mother Nature’s favoring T-Birds on this day was apparently correct, as we no sooner arrived home than she started to blow and didn’t stop for 24 hours!)